One of the Best

I must say, we worked for things today. Quickly, we left Salina at 11:00 in the morning thinking we would have an easy start to the day and a good lunch in Concordia. Instead, we started chasing by 11:30 as a storm formed on the warm advection pattern which was coupled with a shortwave trough.

It was quite frustrating as two cells formed. We got on the wrong one and were unable to get in front of the second when a tornado was reported. By time we got east of it, the storm had weakened and no longer had a tornado threat. Fearing to miss our target area, we quickly made our way back. We had a quick McDonald's lunch and were soon chasing a severe storm near Kearney NE. The storm tornadoed while we were still some distance away. Although we saw the last few minutes of it, we were too far to get to it for pictures and to feel like we accomplished anything good.

We stayed with the storm and were able to chase it quite well. It spun quite a bit and several times tried to tornado, but it just would not do it. Fearing we had missed the best time for tornadoes, we almost went to another storm to the northwest. However, this storm was still sucking air. We watched it continue to spin and look pretty nasty. We decided to position ourselves across the Platte River east of Grand Island. It was a good call since it tornadoed a bit soon after. A small debris cloud under the storm. I must say it was confusing and it looked like there were vortices rotating everywhere.

We then went east on RT 34, along with a caravan of chasers. Yech!

I looked at radar and thought there was a good place ahead of the hook a mile further to the north on a dirt road. It turned out fortuitous as we then saw a small tornado to the west. But it quickly redeveloped south of our position. About 1/2 mile south. 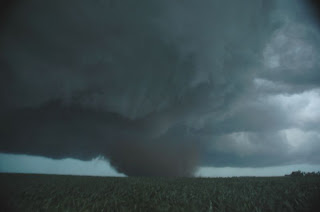 We watched this storm from the northwest side of the meso, right within the hook echo. Although we had fast inflow winds, I never felt we were in an unsafe place for the tornado, as close as we were.

Soon after, the storm became quite large. 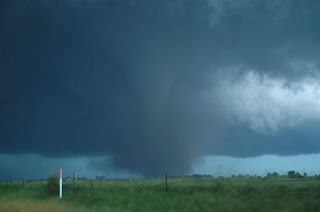 Later, we saw several power flashes as it was a large cone tornado with a dust barrel around it. 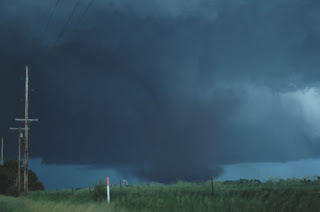 Fortunately for the town of Aurora, the tornado roped out before it hit the city limits. All in all a great chase day. We are in Freemont NE hoping for another good day tomorrow.