8 Hours on one storm. Pretty amazing day despite no tornado.

Started in Newcastle and decided to follow the incipient storms north of the Black Hills. Had to cut through the Hills which are beautiful but slow! Finally caught the southern supercell west of Philip SD. The storm had strong rotation but a lot of dry air in the RFD and only once looked like it might spin out a quick tornado 18 miles west of Kadoka SD. 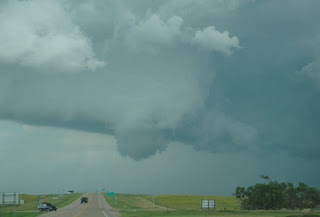 We followed the storm south and east and had various reports on Spotternet. Despite the good environment just to its southeast it never got rooted in the BL. A few occlusions with not strongly buoyant air and tornadoes would not occur. 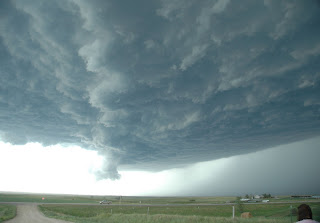 The storm continued to have an elevated appearance until a little later when it suddenly changed its look to a more traditional supercell base. Even still, the storm had a problem not becoming outflow dominant. The low-level rotation never tightened up at all despite some nice vortex arch bookend couplets. 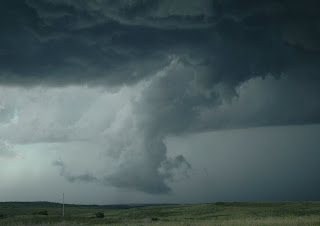 As the storm approached Rosebud a tor report was announced. We were close but never saw anything that looked suspicious. The storm looked more HP-ish at the time and rain may have obscured our view. But then the inflow started to pick up. A few times near the border, travel was impossible with almost due easterly inflow jets picking up dust and reducing visibility to zero. Inflow winds were measured from 35-40 kts but were estimated to be higher with possible gusts to 50. A wrong turn as a storm merger happened led us down the wrong way. We found a way back to Rt 83 through a back road and were treated to a massive and awe-inspiring beast of a storm. 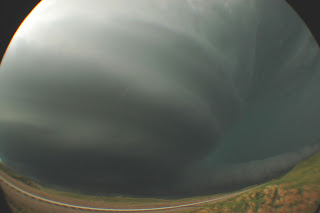 Inflow winds were howling and lightning was frequent. With large hail repots from Valentine we didnt want to mess with it. 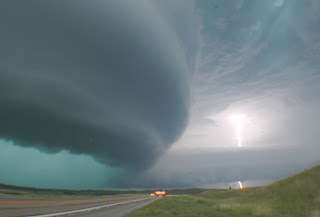 We saw the RFD start to surge so we headed south out of its fury while a few other chasers got munched by the RFD bite. We are headed to GRI to see what tomorrow holds. An excellent day and a great storm.

Paul
Posted by Paul Sirvatka at 11:42 PM No comments: